First, the good news is that I finally finished the puzzle I started with my mom and sister at Thanksgiving. After they left, I was too depressed thinking about them leaving to work on the puzzle. But it's done now. 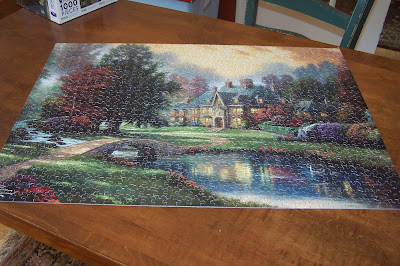 Then, Tim had the kids outside yesterday raking leaves... some of the happy memories.... 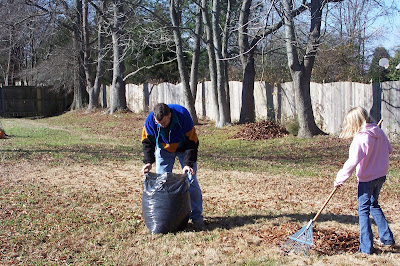 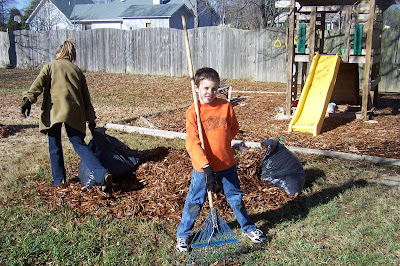 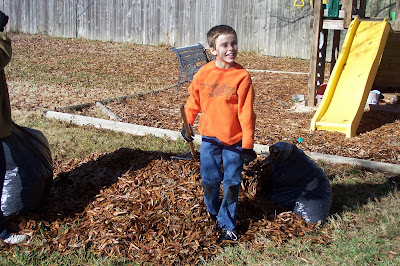 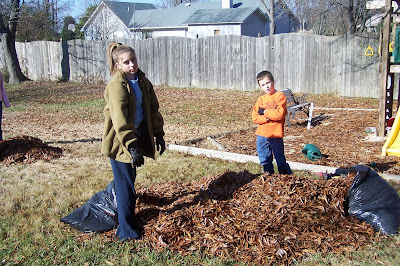 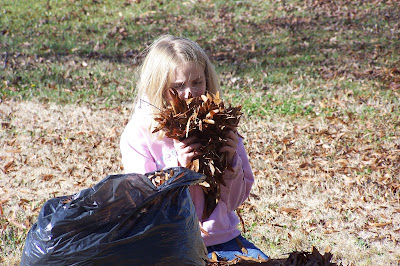 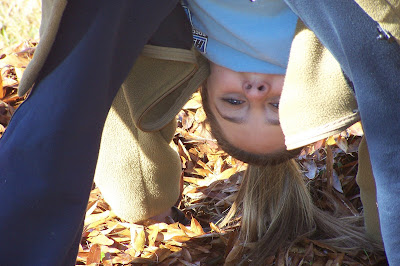 Finally, Libby took this picture from our Christmas tree... and so I leave you with this hope for your holiday season and your life... 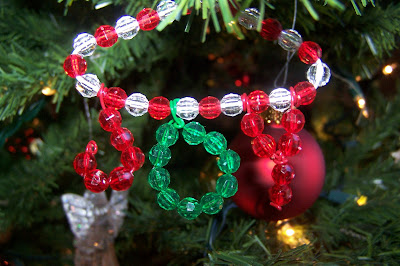 Things that bother English Majors and One Year Olds

A handwritten sign on the drive-thru window at McDonalds today said:

"Please turn off your winsheild wipers"

Sam noticed the error right away......

The PTA at the kids' school has a week every Christmas when they set up a "store" in the library for the kids to do their Christmas shopping. They can buy inexpensive gifts for their family and friends and the PTA wraps the stuff for them. Yesterday I sent Jacob to school with $10 (and by the way, whatever amount you send, the child is going to be encouraged to spend the entire amount)... and on the envelope there is a place for you to list who the child is shopping for. I listed- Dad, Mom, Sarah and Libby. When the envelope came home, they had made a note of how much he had spent on each family member to account for the money. Here is what his envelope said when it came home:

He told me, "I had enough money leftover to buy something for myself!" Isn't he precious? (If you know me, you know that is sarcasm!) But I did laugh about it alot.

In hockey news, his team lost last night to the red team 0-9. Ouch. And the coach wasn't too happy with them, I am told, in the locker room afterward. But then, it was off to Chik-fil-a for a Christmas party and gift exchange and they all seemed to have a great time. 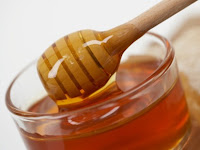 Helpful tip from Dr. Brenda: honey can be used as cough medicine... and to me, it works just as well as Robitussin, but tastes much better. The first time I tried it on myself, it was because I had a cough traveling in the car and all I had was a honey stick available... the cough stopped right away, but I thought it might be a fluke. Last night, I had a coughing attack and so I tried the honey again. One teaspoon and my cough stopped. This morning, I had another coughing attack and took two teaspoons (for good measure and because the piano tuner was here and I didn't want him to think I have TB or something).....and it stopped right away again. Yay! I love natural remedies!

Coincidentally (??), I decided earlier this week to read C.S. Lewis's Mere Christianity just because I never had and I had decided it was time to start reading all the books I have always wanted to, but haven't. When I told my friend Lisa about it, she remembered she had joined an online group that was to start discussing the same book this very week.... hmmmm.... kind-of weird, I guess.... so I signed up, too.
I thought I would bring you all on my journey through what is, so far, an interesting book by a very smart guy. And I've never read any C.S. Lewis, which I know it kind-of weird in itself. The online discussion is a once-a-week thing and this is the day. And it's certainly not too late to sign up yourself if you want to... http://www.challies.com/... or to just read along with me. :-)
This week we were reading just the Preface and Foreward. Here are a couple things that jumped out at me from the Preface (the first one's kind-of long).
"The reader should be warned that I offer no help to anyone who is hesitating between two Christian 'denominations'. You will not learn from me whether you ought to become an Anglican, a Methodist, a Presbyterian, or a Roman Catholic. This omission is intentional... There is no mystery about my own position. I am a very ordinary layman of the Church of England... I think we must admit that the discussion of these disputed points {of "high theology or ecclesiastical history"} has no tendency at all to bring an outsider into the Christian fold. So long as we write and talk about them we are much more likely to deter him from entering any Christian communion than to draw him into our own. Our divisions should never be discussed except in the presence of those who have already come to believe that there is one God and that Jesus Christ is His only Son."
Amen to that. I can't even think of anything to say except to agree.
He goes on to say:
"I am not writing to expound something I could call 'my religion', but to expound 'mere' Christianity, which is what it is and was what it was long before I was born and whether I like it or not."
So, from this it seems I am going to like C.S. Lewis because he is practical (I love practical) and seems to want to see what is there at the foundation of our faith- which is hard to see (isn't it?) through all of our upbringing and traditions and pre-conceived notions.
Hopefully I will have more to say next week when we do Book 1.

Salmon and Macaroni and Cheese

I tried two new recipes from Taste of Home magazine last night and we loved them both. All I have to share is a picture of the leftovers, which will be Tim's dinner tomorrow night. :-) 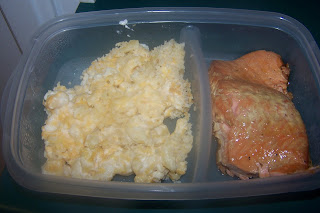 In a small saucepan over medium heat, cook and stir the brown sugar, butter and honey until melted. Remove from the heat; whisk in the oil, mustard, soy sauce, salt and pepper. Cool for 5 minutes.

Place salmon in a large foil-lined baking pan; brush with brown sugar mixture. Bake uncovered at 350 degrees for 20-25 minutes or until it flakes easily with a fork.

** I quadrupled this recipe because I had four salmon filets to make. I also cooked it on the grill instead of the oven. I just made a little "pan" from aluminum foil and put it on the grill on the lowest setting. Yum. Very, very good. And salmon is SO good for you, too.

In a large saucepan, melt butter. Stir in the flour, salt, pepper, and garlic salt until smooth. Gradually add cream and milk. Bring to a boil; cook and stir for 2 minutes or until thickened.

Drain macaroni; transfer to a large bowl. Add the cheddar cheese, cottage cheese and white sauce; toss to coat. Transfer to a greased 9 x 13 pan (Dish will be full). Combine bread crumbs and butter- sprinkle over top.
Bake, uncovered at 400 degrees for 20-25 minutes or until bubbly.

**I halved the recipe and used a square baking dish. Also, the half-and-half I bought said it was a combination of milk and cream. So I just used that in place of the milk and cream... in my case, since I halved the recipe, I used 2 cups of it. Finally, for bread crumbs, try "Panko" crumbs... they are found in the ethnic food aisle sometimes, and also sometimes where the other bread crumbs are found.