My other two children 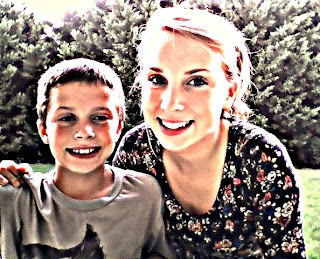 These two beautiful kiddos also had birthdays in 2013.  Libby was 15 on January 13 and Jacob turned 12 on March 20.  I love these two just as much as I love Sarah.  I am just as proud of them as I am of Sarah.  I suppose on their birthdays, I was just a little busy WORKING, BEING A MOTHER, BEING A FRIEND, BAKING COOKIES FOR THE HOMELESS, DOING LAUNDRY, COOKING DINNER, or some other such activity.  I probably should have made time for some birthday posts about these two.  Libby's birthday was mentioned in a post a month or so after her birthday, but it wasn't just as post about her only.  Jacob's birthday wasn't mentioned at all.  Apparently this has bothered their grandmother.  I don't want to make an old woman upset, so here is the birthday post about JACOB AND LIBBY.

Libby is a straight-A student, very artistically inclined, always working on some craft or home decorating project, has her wedding planned already (we're just waiting on a groom now), has a very tender heart, is very thoughtful, and by that I mean, she THINKS a lot.  She thinks about things on a level that most people don't ever reach.  She thinks so much, she often has a troubled soul when it comes to injustice, pain, suffering, etc.  She likes to be at home and she likes to read.  She takes an art class and gets better all the time.  She is involved in the church youth group, loves Jesus, and, based on the number of boys that pursue her, very pretty.  She got her drivers permit in January.

Jacob passes his classes.  That is about what I can say about his grades.  He is smart as can be, but just not yet very interested in academics.  His passion is Hockey and Xbox.  And, more recently, girls.  He plays on the travel hockey team and is just a good sport and awesome team member, in my opinion.  He has always stood up for the "under dog" and been a good friend to people who others shy away from.  He is a mama's boy and still likes to put his head in my lap in church, but let me tell you- he generally won't pick a fight, but if someone else picks one, he won't back down from it.   He is my baby and having two big sisters, has generally been spoiled too much.

Happy Belated Birthday to my second and third children.  I am now done with birthday posts for my kids until January of 2014.  Praise God my mother is now appeased.