On May 17, the girls had their piano recital in their teacher's back yard. It was an evening event, that was supposed to start at 6:00 (but actually didn't start until 6:30) and Sarah was the last (of 25!) students to play. You don't know torture until you have to sit and listen (and don't forget-- look interested) to 23 kids who you don't know, play the piano. Add to that the bugs and the increasingly cold temperatures as the sun went down.. wow... was it worth the chips and Costco cream-filled cake afterward? Almost. :-) Jacob, who avoids torture whenever possible, curled up on Tim's lap and fell asleep about 5 kids into it! I tried to sleep with my eyes open and a smile on my face, but was unsuccessful. And as I realized how cold my fingers were, I worried about whether Sarah would be able to play if her fingers were as cold as mine... but she still did awesome. Both of the girls did!

So, the lighting was horrible and we weren't able to get any really good pictures at all. The only two (below) that are decent, were taken when they were first coming in and being seated at the very beginning. I got video footage of them playing, but Libby's is out of focus and in Sarah's, it's so dark you can only hear, but not see. I don't know how to upload them here or if it's even possible. If I figure that out, I will.

So here is Sarah (in between the two boys), looking as though she knows that in two hours, she is going to be bored senseless and getting ready to play the piano with stiff, cold fingers in front of 50 or so bored senseless parents and one just senseless piano teacher. ;-) 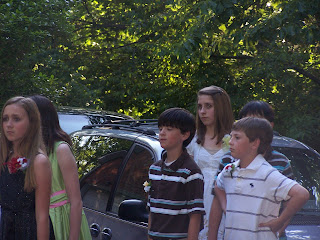 None of this had yet occurred to Libby: (she's the pretty one looking at the camera) 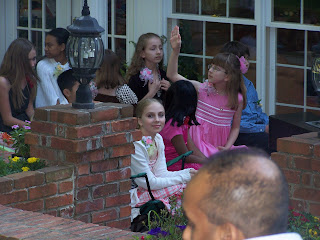 Disclaimer in case the teacher ever reads this: She's an excellent piano teacher- the girls have done so well with her. She just has ALOT of students (this was only one of THREE recitals that she hosts). But she has alot of students BECAUSE she's so awesome. And I couldn't really ask her to host six recitals in order to make it easier on ME. :-)